Flooded with the rich cultural heritage that I had been experiencing the entire day, I stepped into the cool dark restaurant and sat down for a relaxing drink.

I had recently been invited to attend a wedding in my friend’s family, and whenever I get the chance to travel, no isn’t an answer. Especially when the trip is covered and I don’t need heaps of papers to get a visa to my destination. 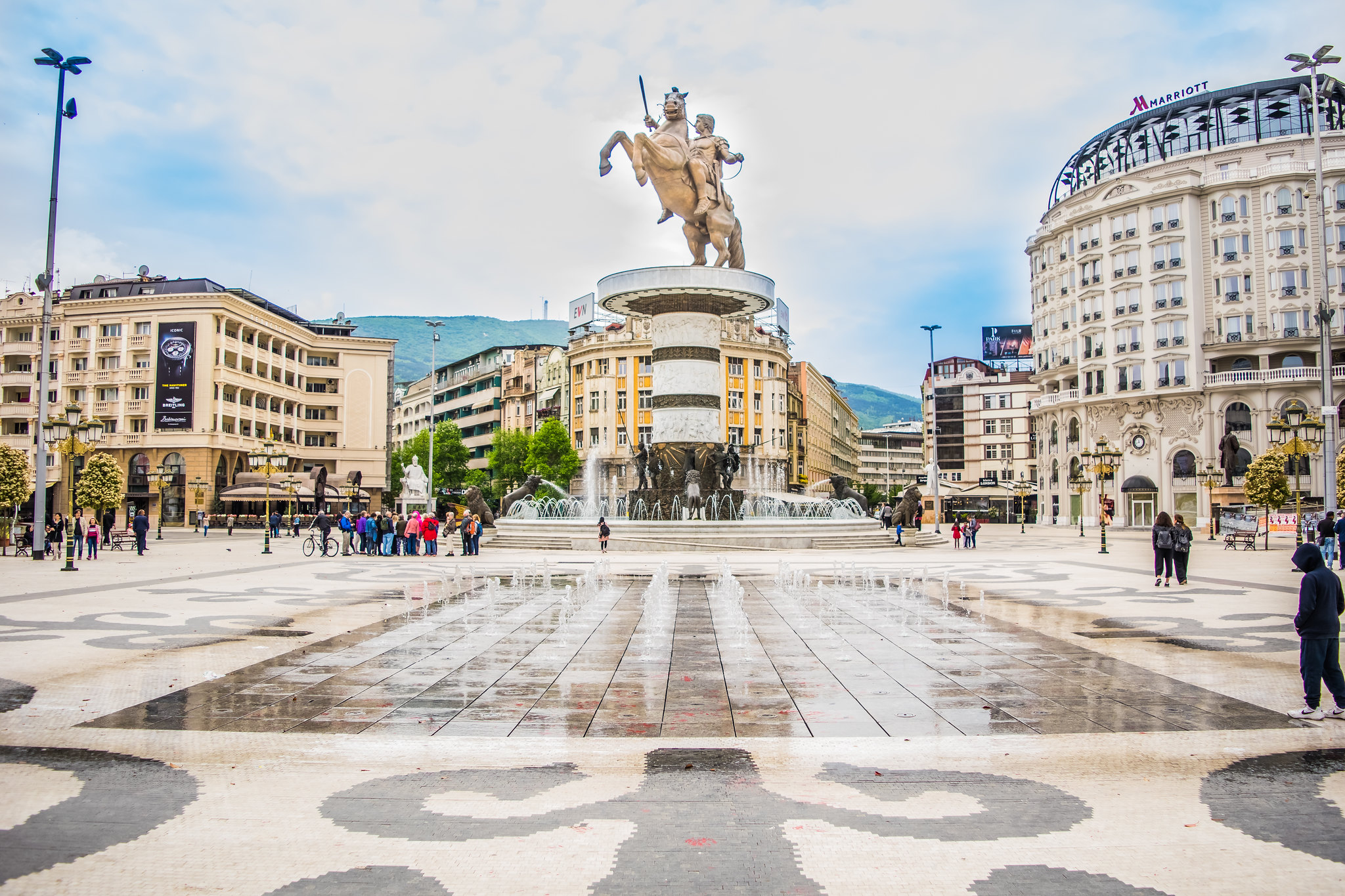 The main square, with a monument to Alexander the Great.

The trip was over twelve hours long and mostly uninteresting, we left late afternoon due to some things that came up, and traveled the entire night, taking more stops than necessary and stretching them out so as not to arrive at a ridiculously early hour. The border was no hassle, surprisingly, and out of the expected eight stamps in my passport for crossing two borders both ways, I only received three, and miraculously neither on my empty pages. (I have a very limited amount of free pages left, and a fresh stamp means another page I can’t put a visa on).

Around seven that morning we arrived and were greeting by a sleepy but very cheerful older couple, welcoming us in and sitting us down for a cup of morning coffee. Or in my case strong black tea (as I later discovered, best in the country imported by our host’s tea company). Two large houses on one property, a pool, a strawberry field in the back, I was already enjoying my day (with only a couple patches of 20 minute sleep on the way). 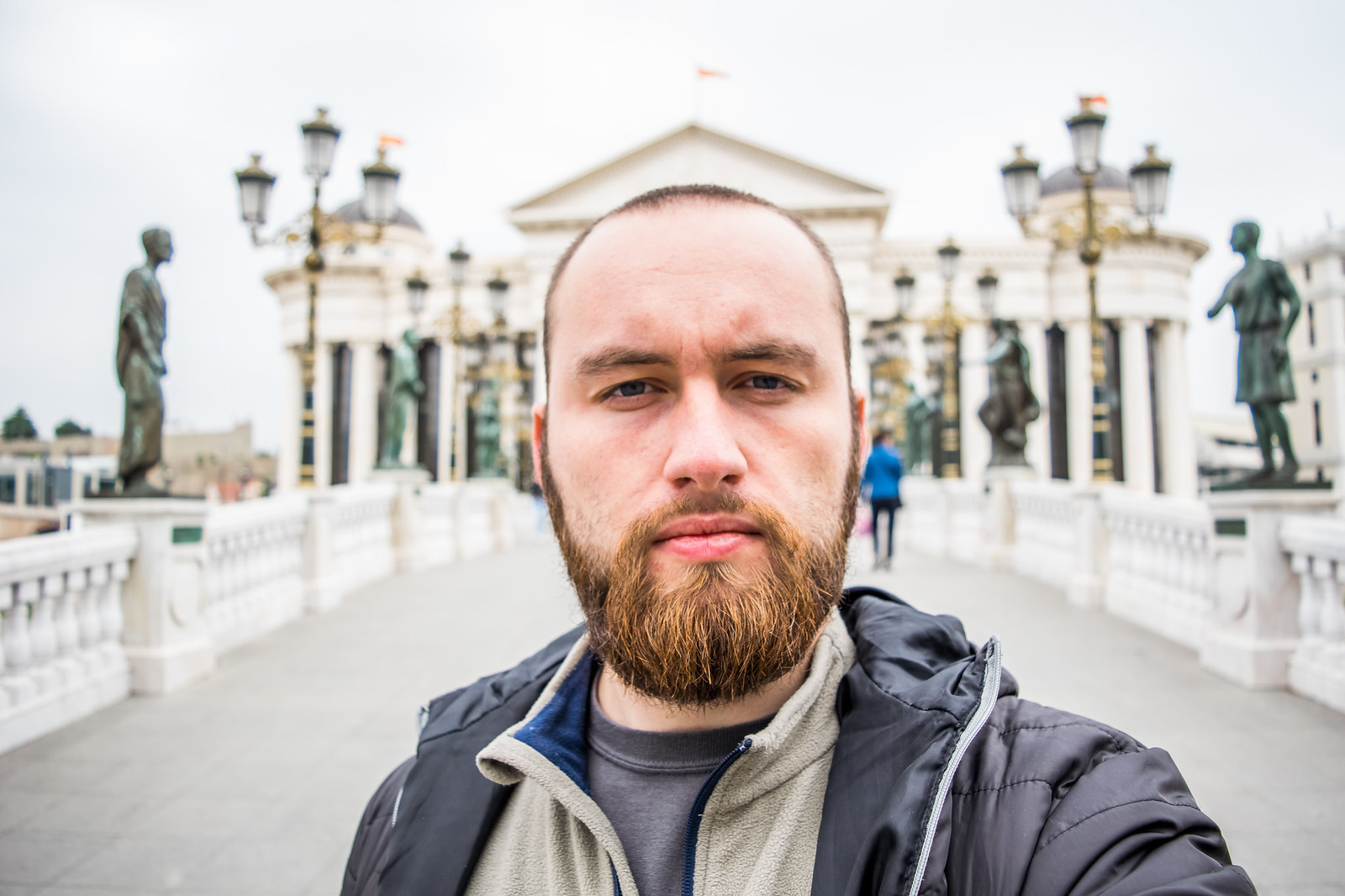 The bridge of famous Macedonians, and the museum of architecture.

With breakfast over, my friend and I headed over to town to find a place to exchange currency, and then sit down for another morning coffee, or early beer, whichever better suited the mood. As a Ukrainian, to counter our reputation, I drink very little in terms of strong drink, but a cold beer on a hot morning is right up my lane. And that’s exactly what we ordered. Just as we were thinking about heading back several hours later, my friend’s brother showed up. Then another. Then their sons. Their son’s brothers and cousins and so forth, and by the end of the hour we were not two but twenty people gathered around the table and (in my case) getting to know each other.

What a huge family. Reminds me of the good old times living with large families of several generations, I love that feeling and would one day want a big family of my own perhaps, but with the way things are headed, it isn’t likely to happen.

I don’t remember much detail of what happened next, I ain’t one for memories, and was also deadly tired, so somewhere between coming home and having lunch I collapsed for a “short” nap, and was awoken several hours later for the evening party.

In fact we arrived on the third day of the celebration, which lasted in total for seven days, of which the third and fourth are more important. Call that a wedding. 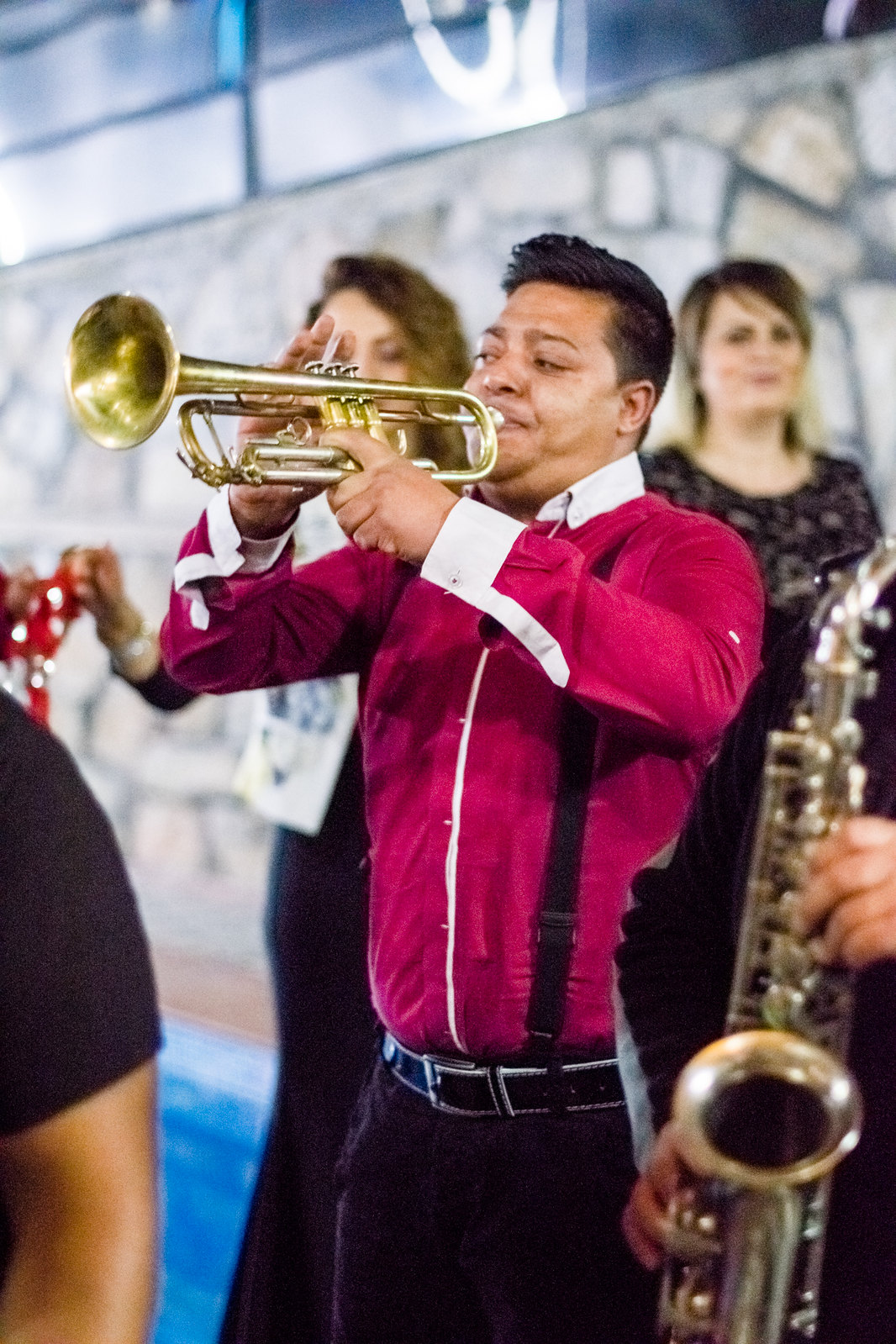 One of the musicians.

That evening we laughed and drank and dance and ate and all over again. Well honestly I didn’t dance, I prefer to observe and take pictures, I’d have jumped into the pool but I wasn’t sure how accepted throwing off my clothes would be, considering most of the women were covered.

The morning after we headed into the center to visit the old time. It’s a beautiful city with plenty of creative architecture, but what struck me the most were the multitude of statues and monuments, peering down on you from their pedestals and horses, seemingly on every corner and street. And that’s coming from someone from a post-soviet country. I did take some shots, and proceeded to the old town, though it was very much like the one in Sarajevo. The marketplace we visited reminded me of my home town, only that this one was hundreds of times smaller, but none the less. 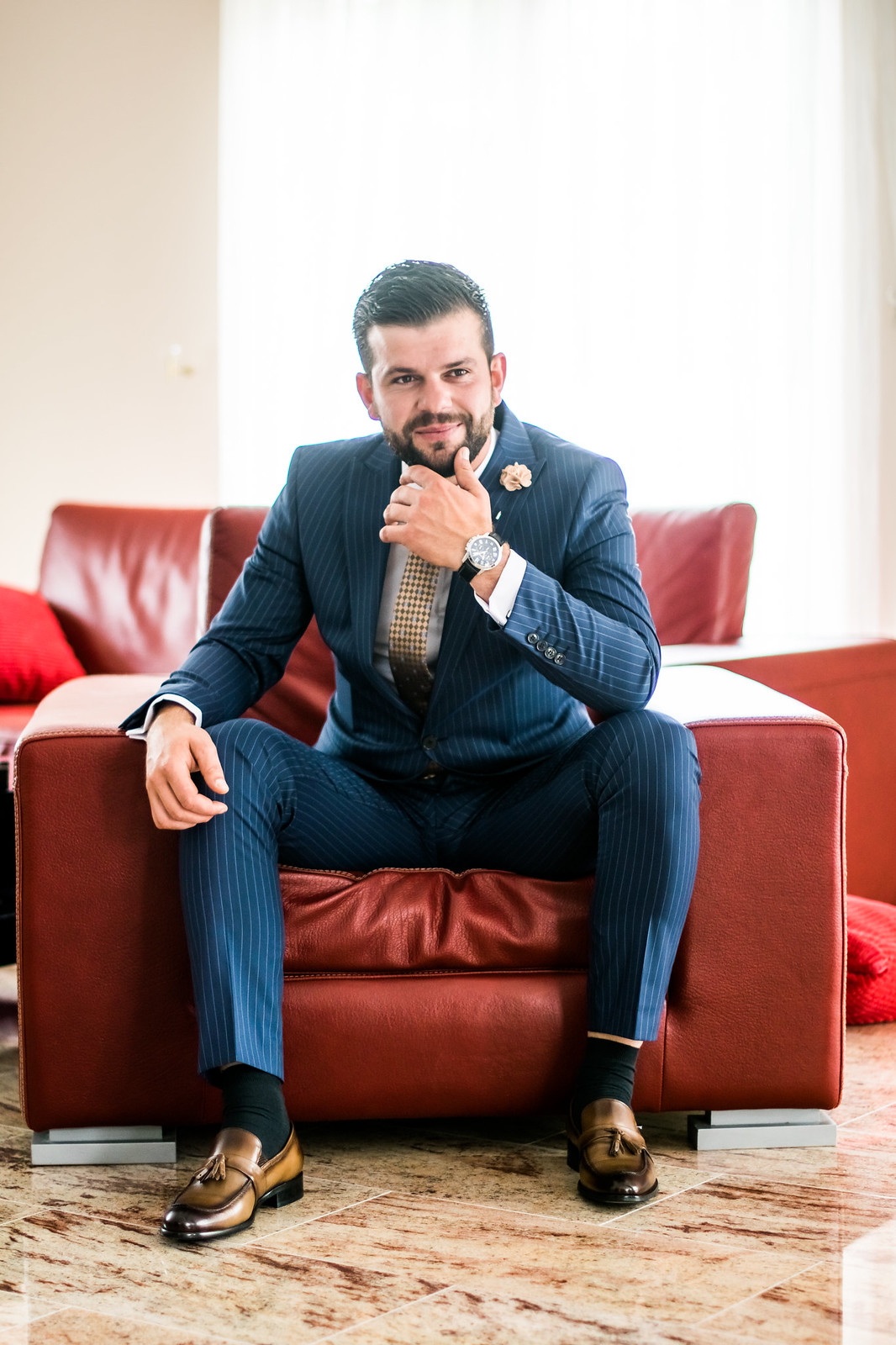 Upon arriving back at our accommodation, we dressed up in our fancy clothes (and some of us prepped our photo equipment), and lined up outside ready to head out to the bride’s abode to pick her up. I noticed that the photo/film crew had arrived, and followed them inside the house to see what they were up to.

The groom was having his private photoshoot (and a couple shots for his brothers), in several locations around the property, leather couches, pool, garden. The softbox they had accompanied by sliders and other more advanced equipment convinced me these guys knew what they were doing, so I stuck to the corners snapping occasional moments they may have missed. 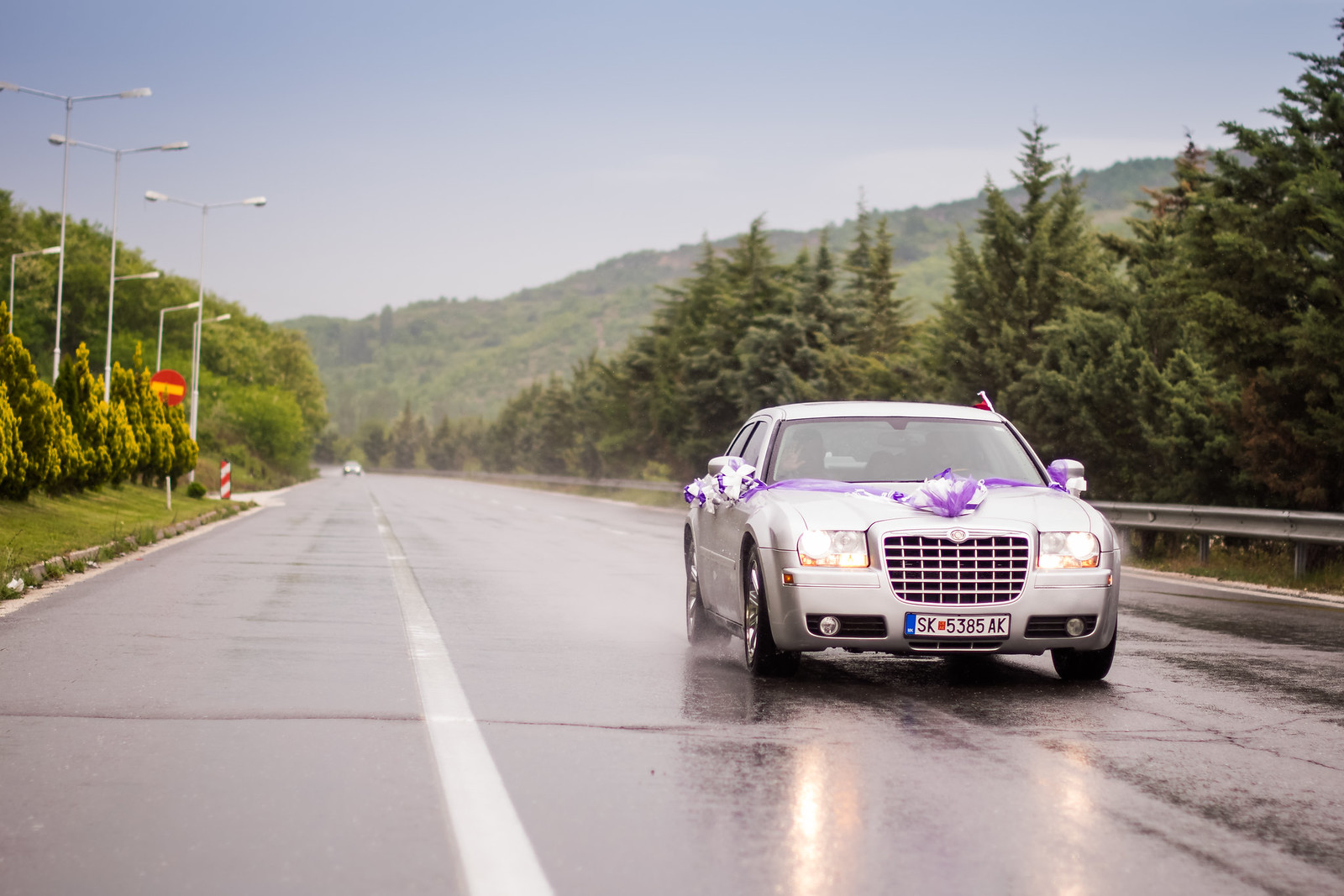 And off we went. A total of 10 or so cars went, not including the bridegroom or his mother, as is the tradition, though I still haven’t figured out why. I was situated with several other young guys in a sports car with the cameraman, as it was intended that we would stop along the highway and film/take photos of the column of decorated honking cars as they passed, which is exactly what we did. 180 kph was our standard speed towards the destination not more than forty kilometers away, as we overtook the column, stopped, filmed, and repeated. 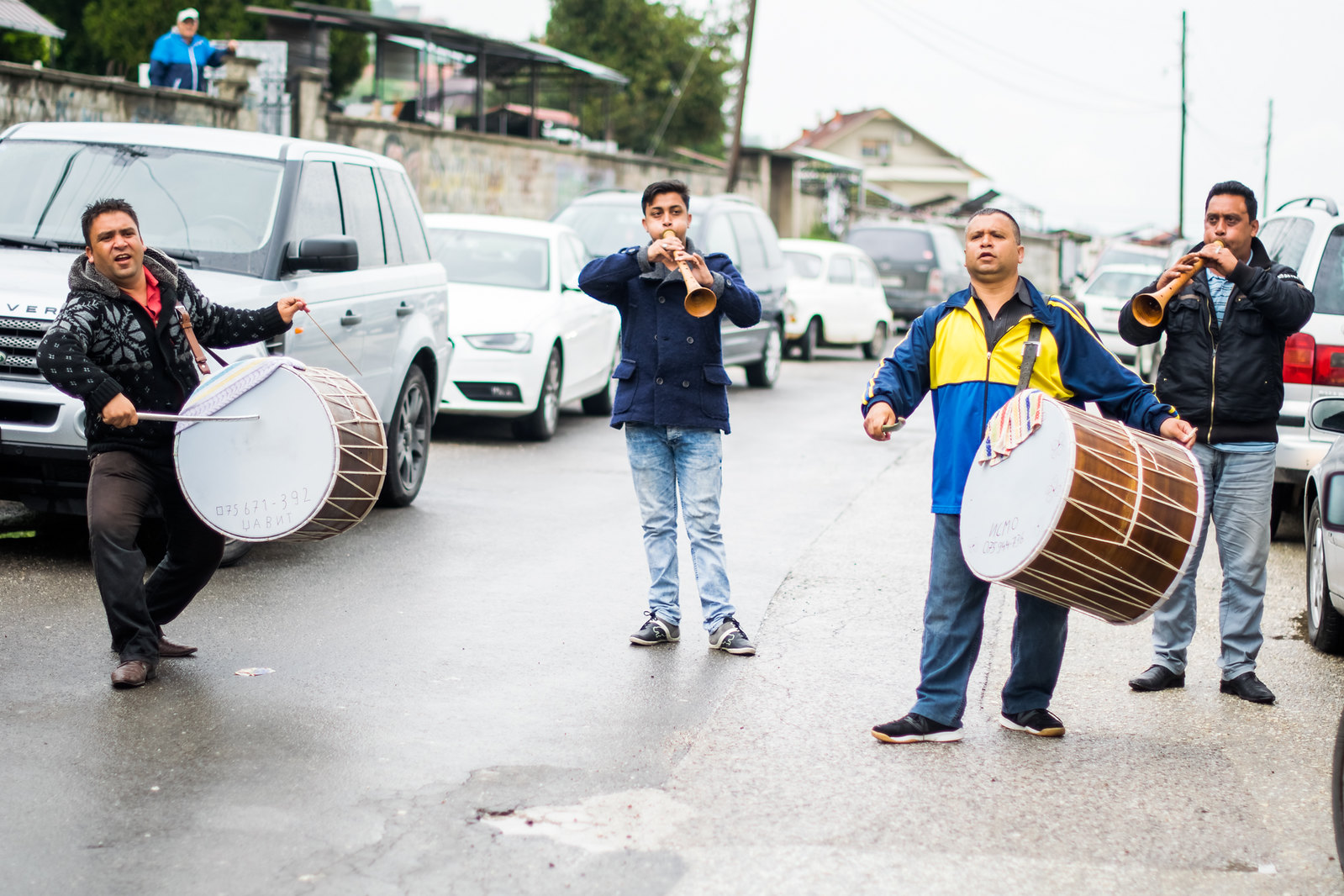 The Musicians at the bride’s household.

The bride’s household greeted us with much joy, as did the rest of the neighborhood and they stood watching and cheering on the side. The men greeted each other in organized fashion, and proceeded to sit around a large table and, of course, drink. Lot’s of dancing, accompanied by large drums and other musicians, and the partying of the day was only beginning. After an hour or so the households said their goodbye’s, as the bride walked out of the house to the loud cheering of the crowd. Wearing probably the largest white wedding dress I’ve ever seen. Oh and guns. A surprising amount of people pulled out loaded pistols and, as it seemed to me, pretty recklessly fired away at the sky. I’m still wondering where those projectiles landed… 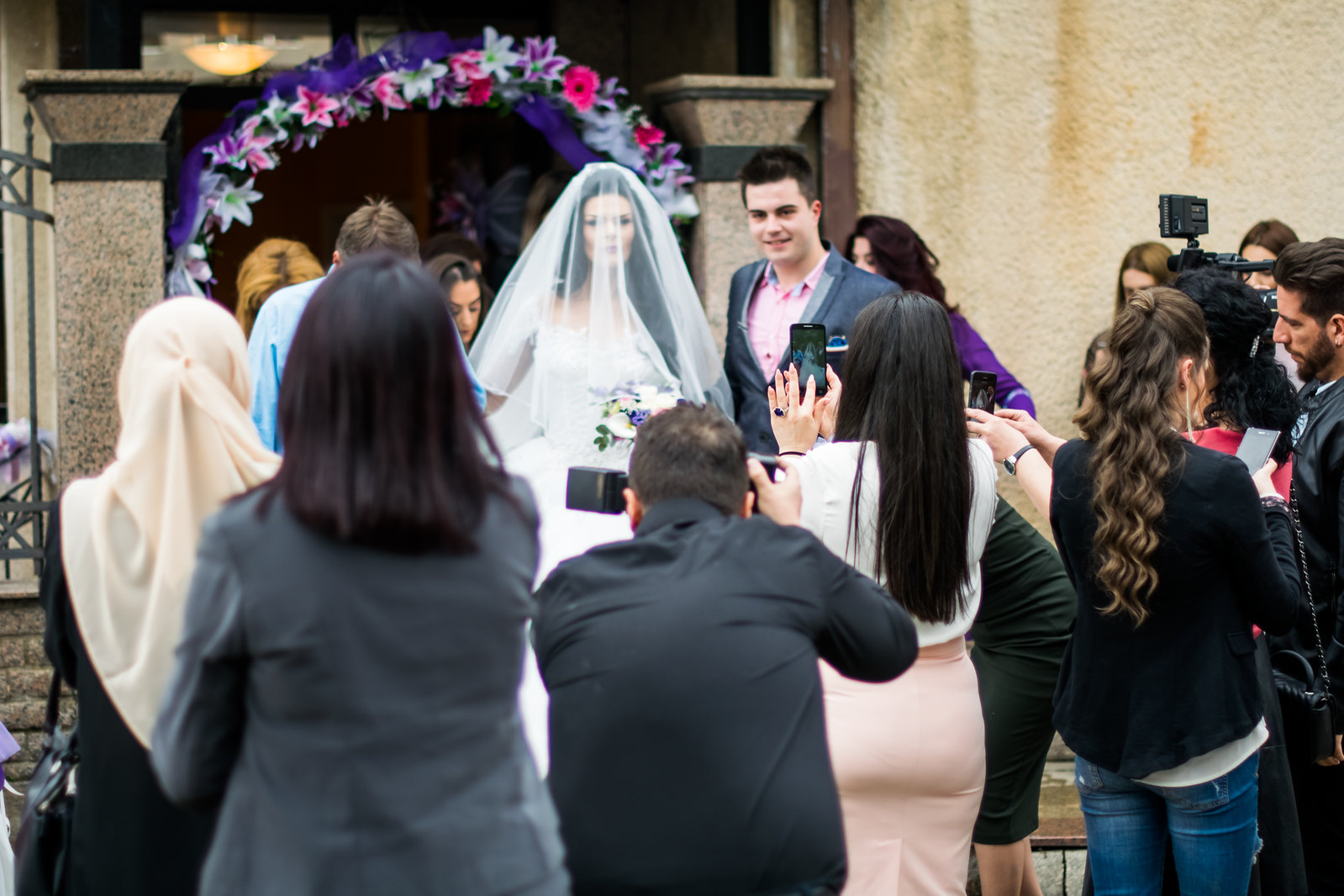 The bride, leaving her home.

Coming back to the bridegroom’s household we were greeted by a very similar situation of cheering crowds of locals and relatives, loud musicians and lot’s of dancing. The men of the household lined up as the musicians danced around them, stopping by one at a time asking for a tip. I also noticed that a drone had joined the filming team, tirelessly hovering about our heads, as its pilot replaced the battery every 15 or so minutes. DJI something, didn’t really pay attention which one.

The restaurant. A giant white tent, which looked a lot more spacious as we walked inside. That drone again, hovering barely half a meter above our heads, I was sure I’d leave with only one ear, or at the very least an even shorter haircut. People were pouring in, being seated at their respective place (I was seated at the table of the brothers, probably the most honorable table aside from the bride and groom, who had their own). The food kept coming in batches, ranging from appetizers to salads and meats, and eventually deserts. And endless drinks. 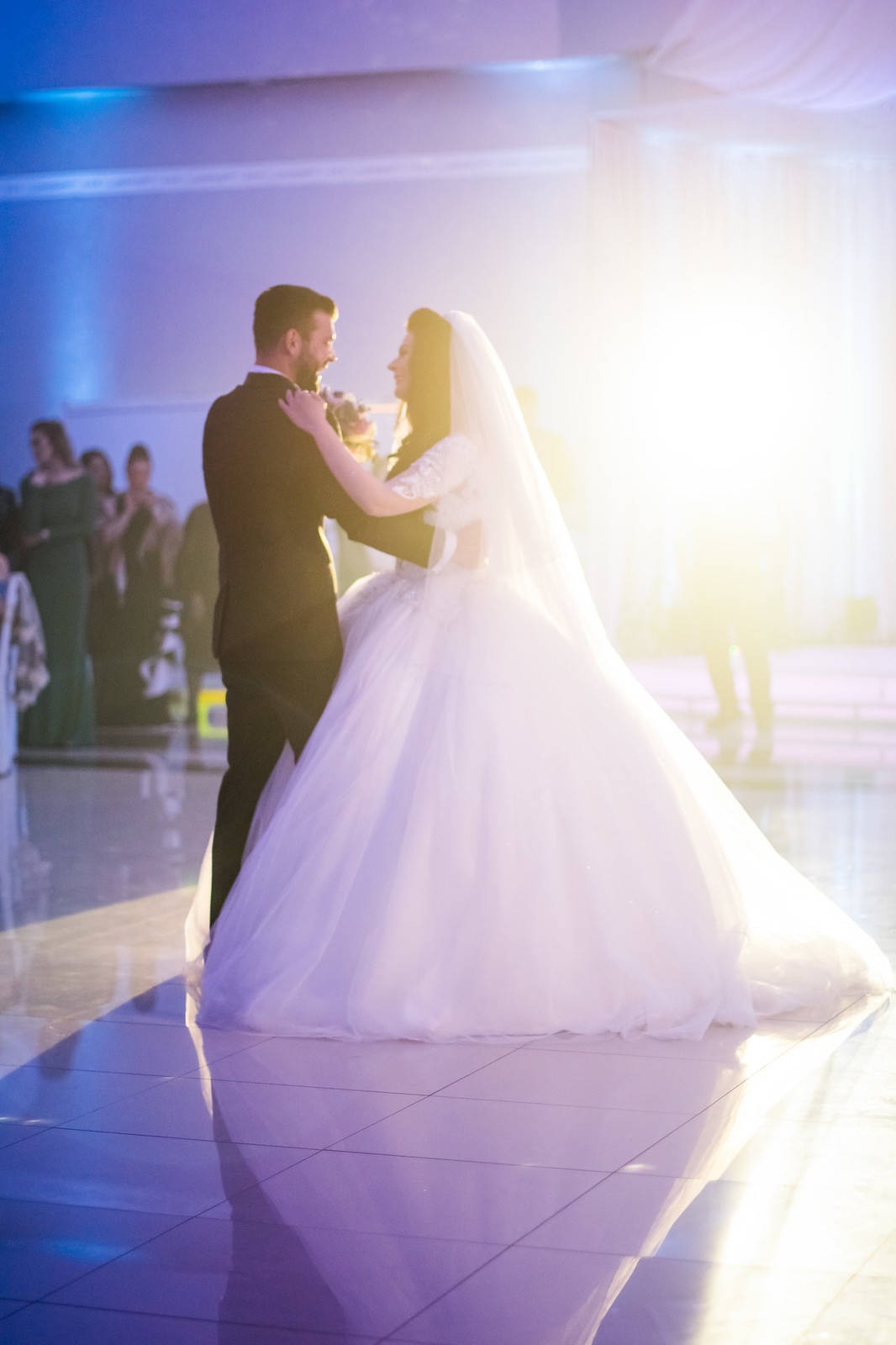 Soon after the newlyweds arrived, with a dance for us all and then a long procession for personal greetings and gifts. And then more dancing. Hours and hours of dancing in circles, holding hands, complicated footwork, as is the traditional local dance. Several bands took turns playing different music, members of the family sang different songs, everybody was enjoying this special occasion. I was pretty much falling asleep at the table once again, not wanting to miss the festivity, but my sleepiness getting the best of me.

On the last day we took a ride on the highway in their Cactus, I was particularly impressed by the speed freeze function, with the press of a button you can take your foot off the gas petal and the car will keep the exact speed until you tell it not to. You can even manually input the speed you want it to go at and it will speed up or slow down accordingly. Nothing too outstanding, but novel to me.

Then a small hike to the nearby mountain, the Eco Village that contained a house for every major city in Macedonia we did not visit, though hopefully we will soon. Final dinner with the family, a couple more traditions to be observed, and off we went the next day. 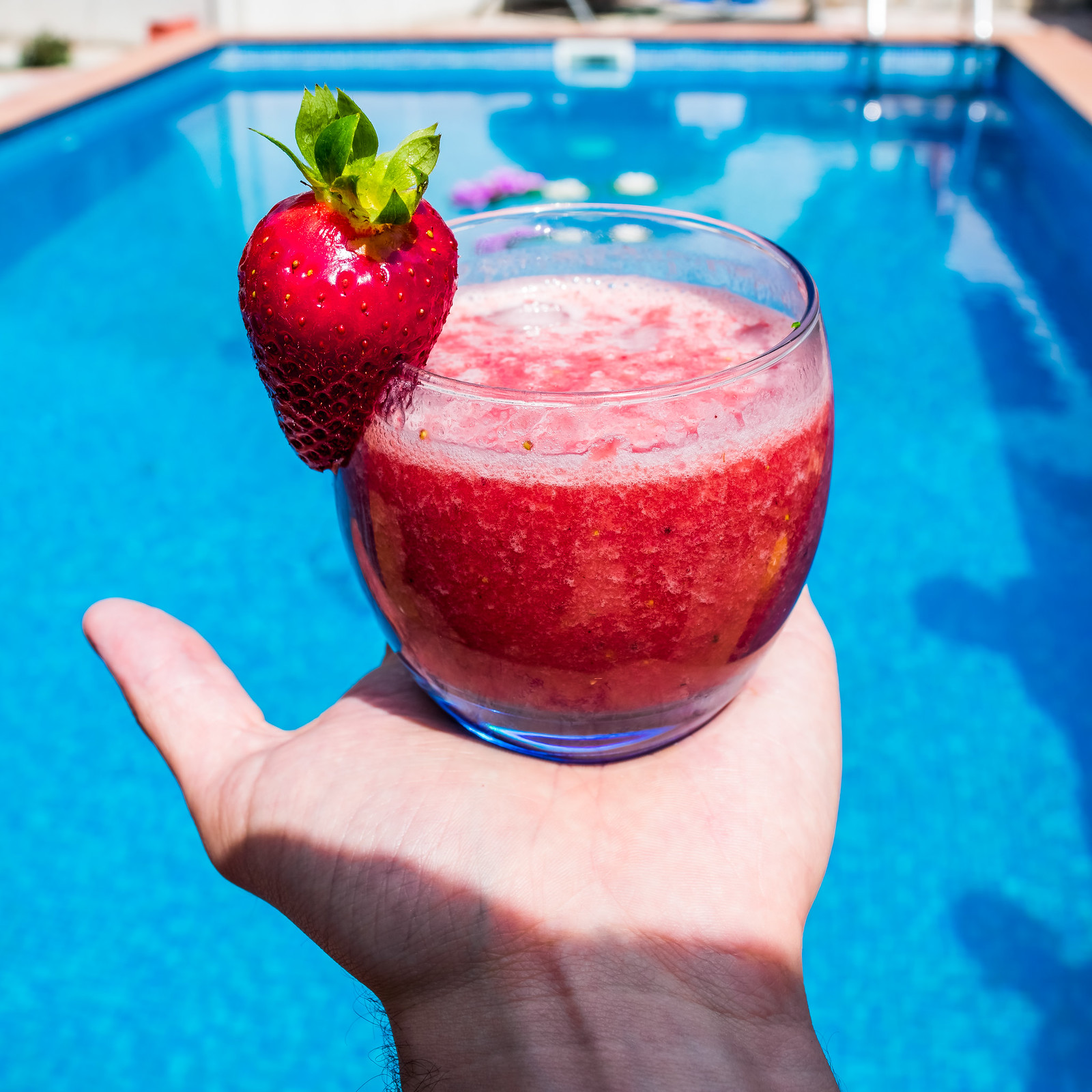 The hard life of a travel blogger. Homemade strawberry smoothie.

What’s amazing for me is that with all these new cultures and experience flooding your mind, time slows down so much that it seemed like a week or two instead of the three days that we actually were there, and that’s one of the reasons traveling is so magical. Every chance I get to, I will take it.