Two fully-packed vehicles of 14 Nomads and several hundred kilos of equipment were on their way.  Rain, clouds and a three hour drive wasn’t the ideal way to start a much looked-forward-to hiking trip, but not like that was going to deter us. 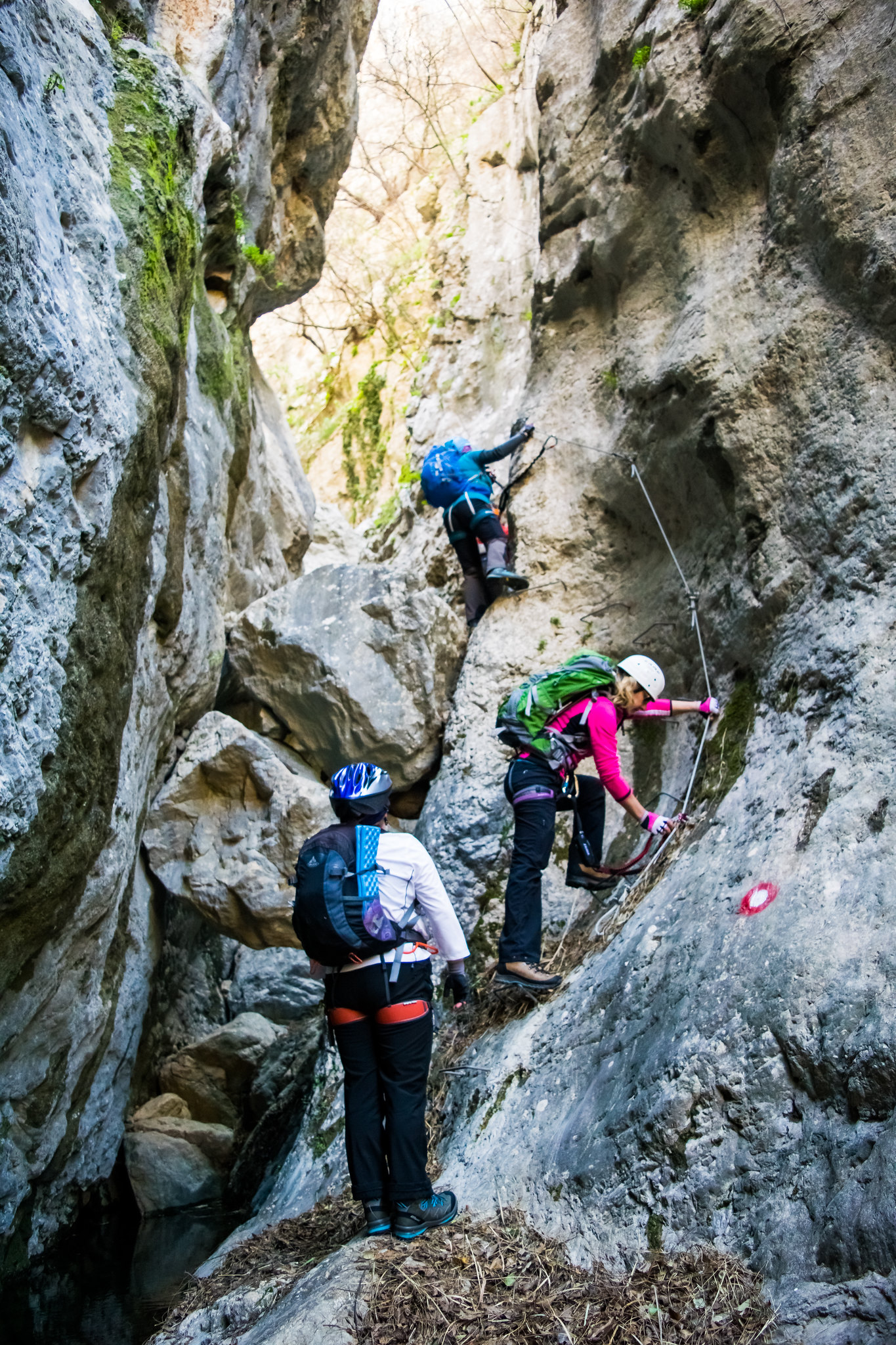 I half slept, half listened to the muffled conversation of my co-journeyers, wondering if I should bother taking off my jacket. In a couple hours, which often feels like much longer  when traveling, we stopped for a short break and morning coffee. After all, we left Sarajevo around 6.30AM, so it’s not like we had time to have decent rest or coffee, much less breakfast.

But just minutes after leaving the restaurant and passing the last ridge of mountains that separates Bosnia and Herzegovina, the weather drastically changed, the clouds crawled away, and the sun showed it’s lovely face. Not that it’s anything unusual, but it always surprises me just how fast it happens. 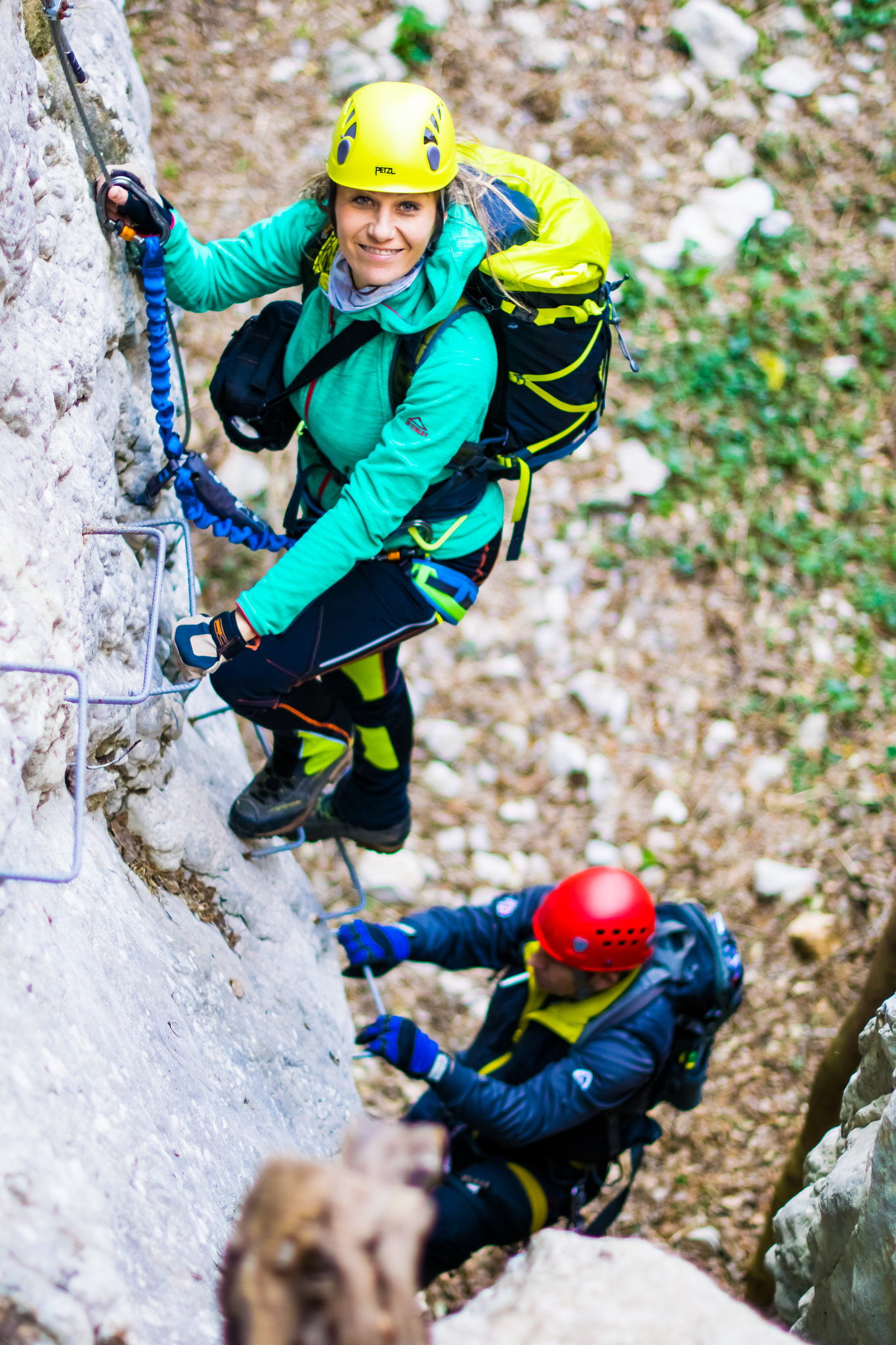 Anita and Selver, the guide.

The “eco center” we parked at was little more than a small cafe and a climbing wall, a half-dozen donkeys and a cage for a couple of large hunting birds, as I later discovered. They also were responsible for the hiking bolts and via ferrata trail set up in the area, so props to them. After greeting old friends, making new ones and checking our equipment, we set up the mild hike to the start of the bolted walls. After donning our belts, helmets, action cams, hiking gloves (which I just received on e-bay, but luckily forgot that morning), checking photo equipment and the like, we started up, single file, the narrow rocky trail.

It seemed to easy. The path wasn’t steep, the tallest climbs were max five meters, the hangs lasted for all of two meters, after a while I stopped securing myself to the rope because there was just no need. And then we got to the vertical climb. Twenty meters straight vertical cliff, not that it was immensely difficult, neither am I afraid of heights, but just the sheer thought of what would happen if you were not secured to the iron guide rope was pretty scary. It took some time, as not everyone was in the fittest condition, or able to pull their own weight, no pun intended. 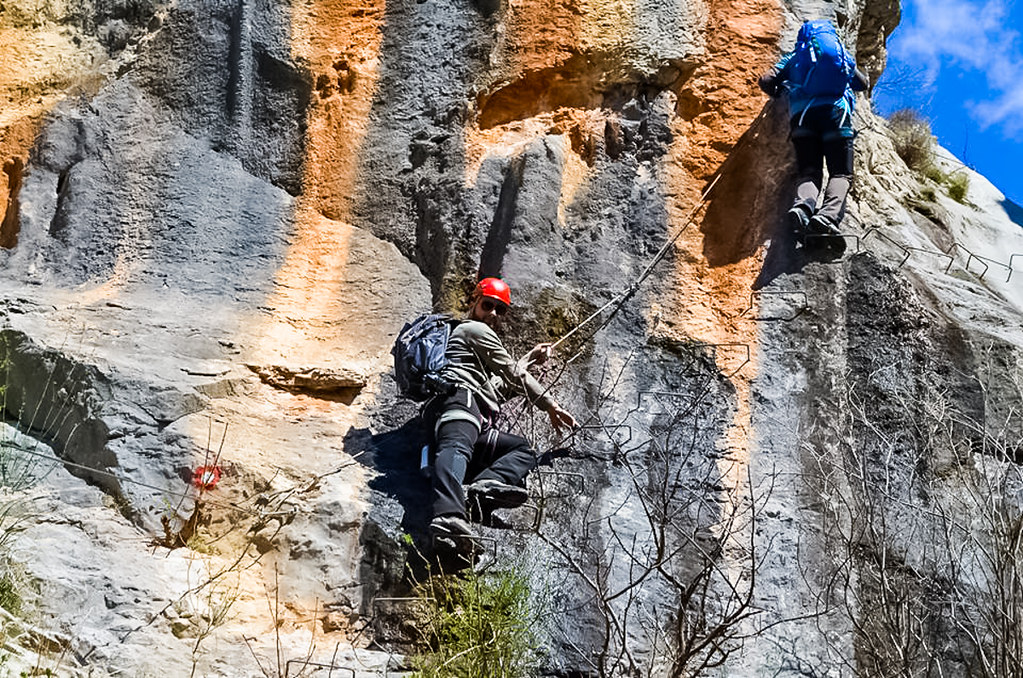 But that wasn’t the worst bit. Around the corner another cliff face awaited, with a difficult edge that required your entire arm and leg strength to swing yourself around it. We all survived.

The rest of the hike was pretty straightforward, no more belts or helmets, just a mild walk on the mountain side. Couple interesting photos along the way, nothing outstanding, but what I didn’t expect was the castle waiting for us on yonder hill. Just at the moment that I spotted it, I noticed that I’m standing on a patch of lush green moss, I just had to put two and two together, and snap a shot. 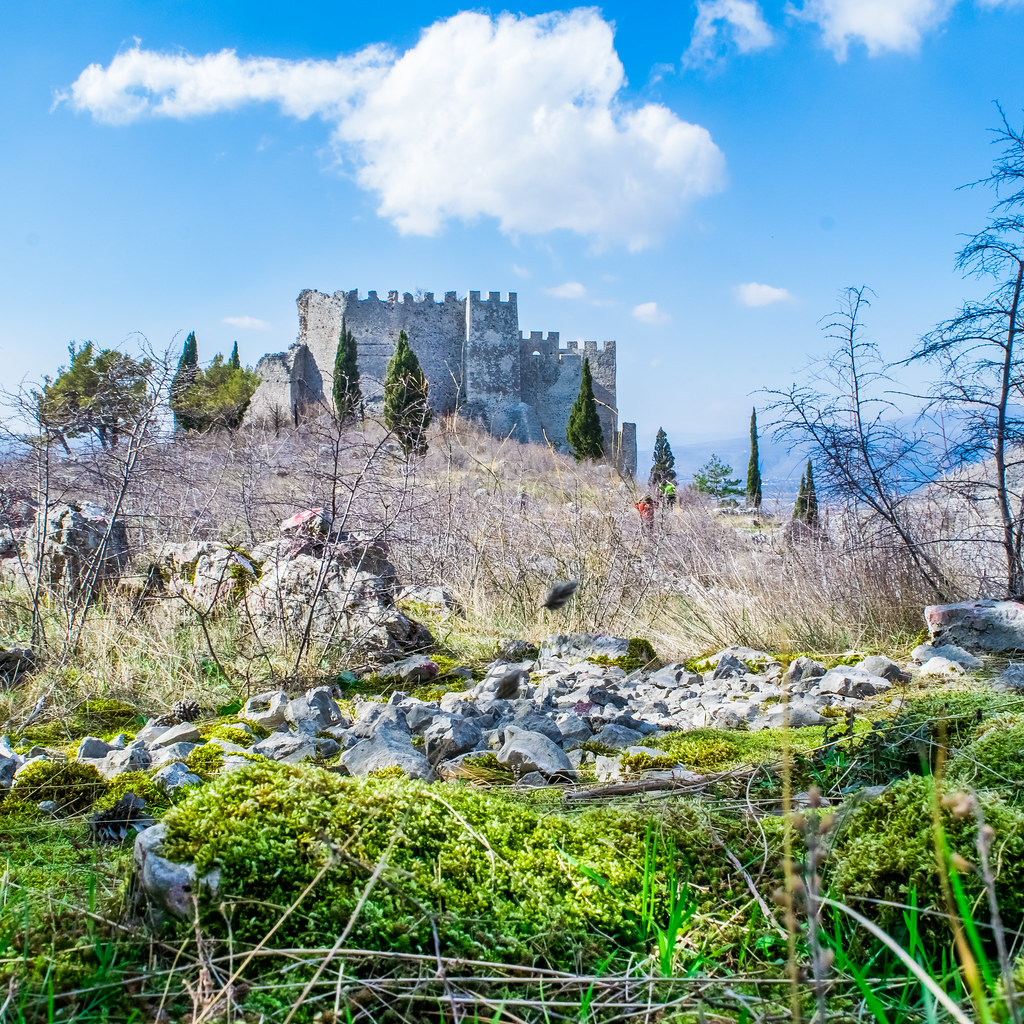 I’m not a very touristy person, much less interested in history so I don’t know why this castle is here, what it was used for or anything of the sort. It had a great view, fun parts to climb on, and plenty of shade for some lunch and rest. Did I forget to mention that it was hot and sunny all day long? Well it was.

I’ll just wrap up here before I get too carried away. The journey to the vehicles was uneventful, stopped by another touristy spot for a cold beer, wanted to take some long exposures of the green Buna river, but didn’t have my ND filters and it was really bright, so another time. Would love to repeat this day tomorrow, but work calls – shooting food at a restaurant, and then band practice with the drum orchestra. Time to sleep on the way home. 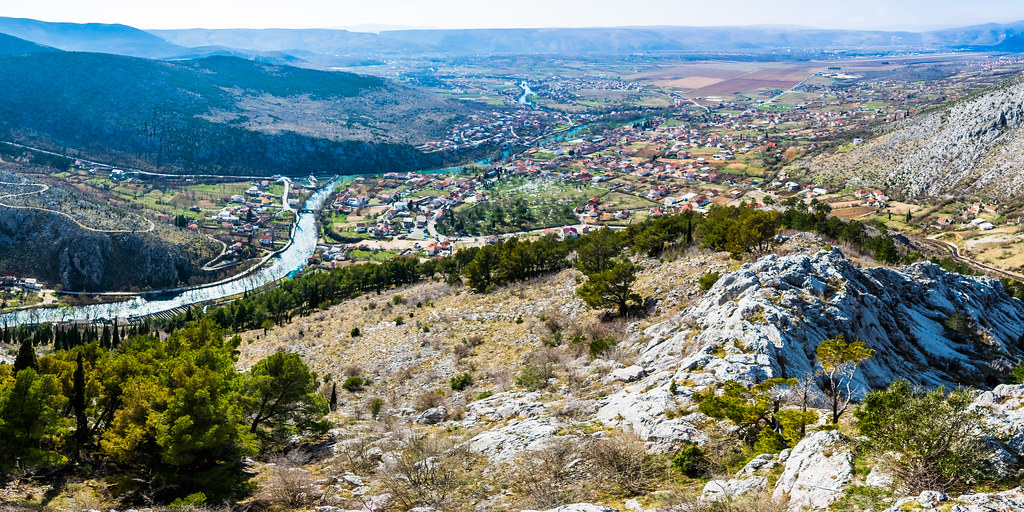 View from the castle.